At Roe River, our collection of UK indies are anything but ordinary. We are immensely proud of our ability to provide a stage for these businesses, enabling them to showcase their products, style and ambition to the rest of the UK.

One such business is In The Nude Art, which was founded by Maddie. Since the foundation of the business just one year ago, Maddie has received extensive praise for her bold and distinctive style, and the powerful ethos that underpins her work.

We spoke to Maddie about her journey so far, the inspiration behind her pieces, and her hopes for the future. 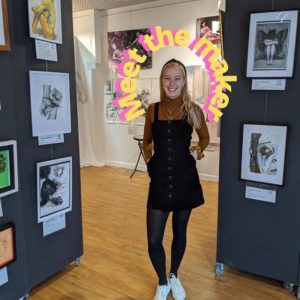 When did you first start your business?

“So I started in the business almost exactly a year to the date. I was in my final year of university and graduated last July. Then I moved home because of the whole Coronavirus situation.

“And being at home, my parents go to bed at like 8pm and wake up at like 5am. So I thought, ‘Oh my god, like, I’m going to be so bored, I’m going to be awake for the next five hours at least. And so I just started doing loads of research.

“Obviously through lockdown and stuff, everybody’s been spending way more time on social media than they should be, and that was me as well. I just kept coming across loads and loads of posts about people really struggling with their body image during lockdown. Because we’re not going out. We’re not getting dressed up. We’re literally in our slacks every day all day. And that definitely impacts on the way that we’re all viewing ourselves and the mentality of our relationship with our bodies.

“So I thought, ‘Okay, how can I kind of help this situation?’ Really, my only skill that I’ve got in this field is painting. I used to paint a lot of women, and my art exhibition was around gender based violence, and so I really focused on women as a key factor there. Then I thought, ‘Not just women, let’s paint them nude and make more people fall back in love with their natural, raw body.’ So I literally started back last May, and the first piece I ever did was myself (a lot of people don’t know that).

“I found that this was really empowering for me, so I thought, ‘Let’s try it on another few people.’

“So I messaged a couple of my friends and I was like, ‘Ah weird question, but would you mind sending me some nudes so that I can try painting it, and see how you feel after it?’ So I did that with loads of my friends and yeah, It just kind of started from there.”

What did your friends say after you painted them? Did they feel more confident?

“Yeah, I mean, it’s probably an experience that you can’t really get in many other ways. Seeing yourself turned into art is so bizarre.

“The taking of the nude is a really big aspect of how we perceive ourselves, and loads of people come to me saying that they want a personal commission, and saying ‘I absolutely hate the photos and just can’t get a right photo’ and I’m like, ‘Okay, right. Let me paint it, and then you can see how you feel after it.’ Their response afterwards is like, ‘Oh my god, that is not how I viewed my body in the picture whatsoever.’

“I don’t make any edits – I’m not adding surreal, perky boobs or anything like that – but I really think that having somebody else view your picture and turn it into artwork helps people to finally realise that they don’t look like what they perceive themselves to look like; their body stunning, and they don’t even realize it.

“At the moment, I’m going through a kind of process where I’m allowing people to submit a form to be about why they want a personal commission done, and then I’m going to pick someone from those submissions to have a free personal commission. Because I know that, given the current situation, a lot of people don’t have the money to be spending on these sorts of things and, in a way, it is a form of therapy. So I thought that, if there’s one thing that I can do right now, it’s to offer that out.

“I’ve actually shared my story on Instagram, about my personal relationship to my body and why it’s changed over time. And that’s not really something that I’ve ever shared before, but what’s really nice about this platform (and why I’ve always focused on positive affirmations) is that I can say to people that this is a safe space, and if you want to come to me and ask for a personal commission because of a reason – maybe you’ve been through a physical or emotional experience that has disconnected you from your body – please come and tell me.

“A lot of the people and women that I’m working with are struggling, and really need that kind of confidence boost.” 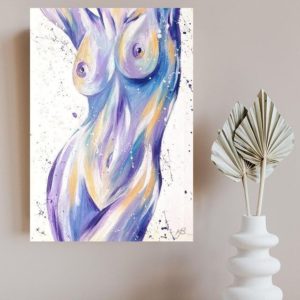 Am I right in thinking that social media has been a big part of your inspiration to start the business?

“Absolutely, I mean, I first joined social media when I was like 14, and the people that I started originally following were like Kendall Jenner, and those kind of stunning, models with a level of attractiveness that is never achievable. And I was bombarded with that; I followed so many people that were never real on their Instagram.

“I didn’t really realise until this time last year, when I spent 3 or 4 nights cleansing my social media. I completely cleansed my social media, then followed accounts that actually made me feel good, and made me understand conditions that I have, like IBS or bloating. That was a massive thing for me – before, I never really realised that other people struggle with that. ”

What kind of age group normally approach you for a commission?

“When I first started, because I started through the friends and family realm, most of them were my age, millennials, and Generation Z, but now I’m finding more and more I’m slowly branching out into different age groups. So a recent piece that I did was a lady who was 60 or 65. And that was amazing. And she had the best body for a sixty year old! I have done quite a lot of older women actually.

“The majority of the personal commissions that I get are kind of between the ages of 25 to 35, but I am also getting women who have had their first child and then want to reconnect with their body. I’ve even painted quite a few pregnant women now as well, and that has been amazing, because they’ve wanted to commemorate that experience in a painting.

“I mean, even like my grandparents follow my nude page. When I first started, they were like, ‘Oh, why are you doing that?’. And then, my Nan came to me a couple a months after I started, saying ‘I want you to paint me!’.”

What are your aspirations for the business’s future?

“Gosh, so I’ve got so many. Short term, I want to collaborate with businesses and have my art displayed in public places, because I want to try to break that taboo down by partnering with a few businesses. So that’s a big goal, next, to really get out into the local area and establish a bit of a community in Birmingham, as well as establishing my name as an artist.

“Then long, long term, I want to eventually open an art cafe / gallery, where I can do my workshops and classes, as well as have my art on display. Plus I love food as well, so I can have a little cafe and cook. That’s the big goal, and one day, we’ll get there.

“I want to kind of create a – we talk about my platform as being a bit of a safe space – but I want to create that in real life. Because I don’t think there’s really anything at the moment that I can personally think of, where you can go to a cafe and sit down, have a paint and chat to a woman across from you who has maybe had a similar experience to yourself.” 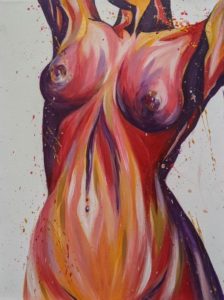 Do you feel hopeful for the way society’s attitudes seem to be going?

“Definitely. There is a lot to be done, obviously. And I think the mainstream agenda is not going to change until everybody rallies around. And I think that’s the biggest thing, even if I can change 10 people’s opinion, then I’ve made a bit of a difference.

“Maybe before – when I was younger and a bit more naive, and I was kind of sucked in by social media – I’d see somebody maybe who’s a plus size and think, ‘That’s not really what we should look like.’

“Whereas now I’m like, ‘You should absolutely embrace it.’

“I absolutely love painting people of different shapes and sizes, because it’s just so much more real. And it makes you feel good because you realise that you don’t have to look a certain way to be valid or to hold space.

“Now, through this, you learn to appreciate more the differences between people’s bodies and not the similarities.

Why do you think paint, in particular, as a medium for this artwork is so effective?

“I chose to use paint because, even though my work is figurative (so it is of the body and it uses the same proportions as the photograph), I wanted to make it as abstractedly colourful as possible.

“I think that takes away from the sexuality and sexualization of the picture. Because when you look at it, it is obviously a nude, but nobody would send you that to try and turn you on.

“It’s making it more about the lines and the beautifulness of it, because it really is. It’s one of the main reasons why I don’t paint men’s bodies – they’re not beautiful! Even people who don’t perceive their bodies to be beautiful, you have to appreciate the curves and the lines.

“A lot of people come to me and they want their scarring and their cellulite to be included in the painting, and you can show that through the paint, which makes it into something beautiful. I think that’s the biggest part, because when people see it, it blends into their body, and that’s what it does in real life.

“Because we’re so taught to look at the bits of our body that we hate, we don’t think of them as beautiful or part of ourselves. We see them as an external part that we’re trying to fix. But when we see it all together in beautiful colours, through the mixing and blending of colours, we see that it is all part of you as a person.”

You can find In The Nude Art, along with many other inspiring indies, on the Roe River website. If you’re keen to find out more about her work, have a browse through Maddie’s Roe River page.

What to buy for a Leo

Our favourite gifts for the grandparents

Our 6 top tips for starting out with TikTok marketing